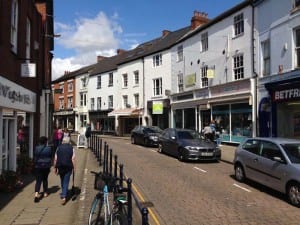 Market Harborough is a popular location in which to live, work, and visit for many reasons, including its picturesque nearby countryside, easy access to several of the country’s motorway networks, and historical town centre. The fast 1 hour commute to London is also a big plus for many transitioning between life in the city and country.  However the feature that makes Harborough stand out against many modern town centres is its status as a market town with a thriving independent shopping scene.

One of the key factors that means so many national surveys put Market Harborough as one of the ‘best towns’ to live in is the thriving independent shopping scene in the town centre. Whilst many towns and cities can be described as ‘clone towns’ each with a seemingly identical set of national chain stores, Harborough is fortunate to have more than its fair share of traditional family-run shops as well as enterprising new businesses.

Although many national retailers – including supermarkets such as Sainsbury’s, Tesco and Waitrose -have a strong and welcome presence in the town, it is the independent retailers that give the town much of its character.

In the past year this has taken the form of ‘shabby chic’ retailers – with 3 opening up in the town in recent months. The Great British Bake Off and the popular revival of artisan bread-making seems to be a current trend in new retailers, with new shops opening in the town that are following in the demand for freshly baked local food.

At the epicentre of the town – and the very heart of its local shopping sector is Church Street. Running through the town’s centre and ending at St Dionysius Church, it is Harborough’s stand out independent shopping destination. With a wide range of boutique stores, bakeries, public houses, butchers and high end clothing stores, the cobbled street is bustling with independent stores in Market Harborough.

Naylor’s currently have one unit available on Church Street, with two floors of office or workshop space as well as an attic and cellar. The property extends to 1400 sq. ft, benefits from A1 retail use and would be suitable for a variety of uses (subject to planning).

The unit could be the perfect launch pad for a new business, or a bricks and mortar expansion for an existing smaller business that may have been operating only online.

To find out more about the Church Street unit, click here

To find out more about renting or letting commercial units with Naylor’s Estate Agents, visit ww.naylorsestateagents.com