Housing in Market Harborough and Northamptonshire is popular with commuters thanks to the region’s great transport links to London and other major cities like Birmingham and Leicester.

A new development of five luxury Northamptonshire homes launched on the market in January and marketed by Naylors estate agents would be ideal for commuters seeking an attractive rural location which is also close to amenities and transport.

The Bay House Farm development in the village of Orton is located on the site of a former cattle farm and the houses are being converted from the old farm buildings. At Naylors we often experience high demand for detached properties, swelled by the rising numbers of people looking to move out of London and commute into the capital or other commercial centres.
“Many people are looking to live outside of London and commute in, attracted by house prices and quality of life,” comments William Naylor of Naylors estate agents. “The Bay House development is ideally located for those who want to live somewhere rural and idyllic, but which is easily commutable to major cities.”

The development is located 5 miles from Kettering and 8 miles from Market Harborough. Both towns have a journey time of less than an hour by train to St Pancras. 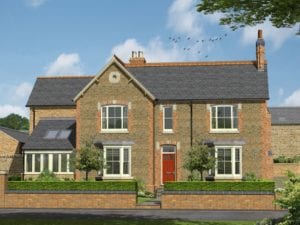 As part of a mission to preserve the site’s rustic style, reclaimed materials, many of which are from the original farm buildings, have been used throughout while original features such as Victorian Brick Archways and exposed ironstone walls have been restored.

“This development really showcases how older buildings can be sympathetically converted for modern day living,” adds William. “Each plot has wonderful views and offer rural living at its best; all while offering easy access to Kettering, Market Harborough and Northampton.”

The plots went on sale on 19th January and the first two houses are expected to be completed around March.

According to the land registry, the average house price in Northamptonshire was £207,000 in November 2016, compared to an average price of £481,000 in London. Both Kettering and Market Harborough were named as one of the best commuter towns on Midland Mainline by Country Life magazine in 2014.

To find out more about the new development or any of our properties available in Market Harborough and surrounding areas, call Naylors today on 01858 450020.